Home > Newsroom > 2020 > Accountability for GBV must be internalised and enforced

Accountability for GBV must be internalised and enforced

“I strive for a world in which my grand-daughter doesn’t have to say she doesn’t want to walk out at night for fear of being raped”.

That’s what keeps Judy Hermans going in the fight against gender-based violence in South Africa. The ANC Member of Parliament was addressing a #CourageousConversation on ‘Gender-Based Violence: Doing the Difficult Work’, facilitated online by the Desmond & Leah Tutu Legacy Foundation. The event took place on 13 August 2020 and was organised in partnership with the Embassy of France and the French Institute in South Africa.

First Councillor of the French Embassy, Emmanuel Suquet, pointed out that gender-based violence was not an exclusively South African problem. It is also a massive problem in France, and a priority for the government.

The participants in the conversation agreed that accountability, transforming the culture of violence into one of respect, and addressing structural gender inequalities were the key areas requiring focus to address gender-based violence. “Accountability must matter,” Tutu Legacy Foundation CEO Piyushi Kotecha said in her introduction. 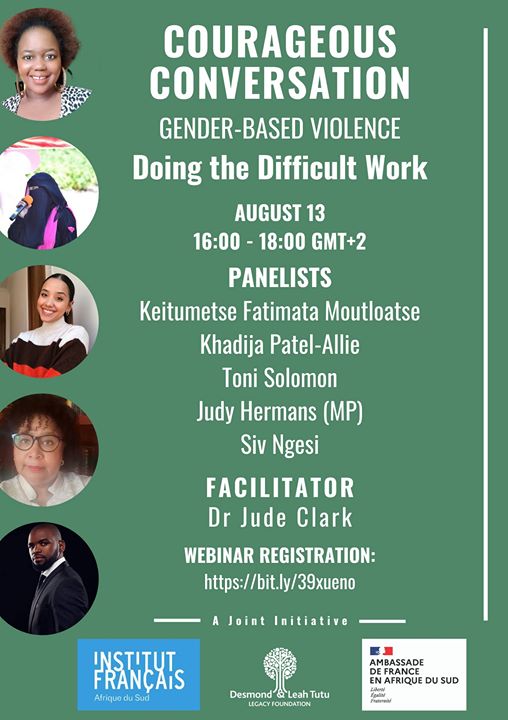 Panelist, Keitumetse Fatimata Moutloatse, the chairperson of the Black Womxn Caucus at Wits University, said the struggle against gender-based violence was not advanced through mass events broadcast live on TV but through an infinite array of day-to-day experiences as people learned to appreciate and celebrate each other.

Her comments strongly resonated with Archbishop Tutu’s famous call to: “Do your little bit of good where you are; it’s those little bits of good put together that overwhelm the world.”

She said the young people participating in civil society movements such as Total Shutdown and Fees Must Fall had been spearheading a growing societal consciousness about gender discrimination and violence against women.

A “young movement” was taking shape and new gender conscious language was emerging, something that is essential considering that the culture of violence is perpetuated through the language and the imagery society uses. The movement would be stronger were it to develop a more inter-generational form.

Research showed that approximately 70% of South Africans participated in one or another form of religious activity over weekends, she said, calling on the faith sector to become the safe havens they are meant to be.

Speaking of the Muslim faith, Khadija Patel-Allie, a community activist and Muslim Judicial Council executive member, said gender discrimination was not an issue of the scriptures, but of their interpretation. Faith should be embraced as a protective and not an abusive space for women.

The extent of crime and violence in society was almost overwhelming. For Patel-Allie, this called for much more involvement and conversations at grassroots level, from individual to individual, to touch people in ways that help women.

Hermans said there was a need to empower grassroots women, so that they can protect themselves and not depend on people and circumstances where they get abused.

The difficult work required was changing how men related to women, within the home, in their communities and in society. “We need to take it further. We need to say – I’ve heard it said that all children must learn coding, and a professor at Wits told me AI classes are mandatory – why aren’t we doing the same thing for gender-based violence?”

Speaking of accountability, intersectional feminist and Stellenbosch University law student Toni Solomon called on women to account, in the first instance, to themselves. “Internal misogyny feeds into gender-based violence, she said. “We must hold ourselves to the same standards to which we hold others.”

She said her experience of the university residence system had proven that while there were many good policies, they were of no use if they were not enforced. Women did not feel safe, and writing to the authorities got nowhere – all in all there was a chronic lack of empathy or support for women, she said.

The only male participant in the conversation, comedian and activist Siv Ngesi, said his forthright views on gender equality did not always gel comfortably with his career – or his peers. The truth was, he often felt embarrassed being a man, he said.

Ngesi was well aware of the urgency to undo toxic masculinity, and did not shy away from criticising the models projected by our society. “We can’t let society raise our boys, I was raised by society and I see the internal fight I’m still dealing with. We need to unlearn the poisonous things that boys are taught… teach from a very young age the basics of respecting each other and treating them like we’d like to be treated.”

He said the day he no longer felt profoundly hurt by gender-based violence would be the day he knew he had lost his moral compass and humanity. “Every single case needs to hurt, and I need to feel the weight on my shoulders, as a man. That’s how I keep going… I always say to my guy friends, ‘imagine living in a world where women are not scared of us…’”

The conversation was facilitated by psychologist, Jude Clark. “We call these conversations ‘courageous conversations’ because they push us out of our comfort zones, they are uncomfortable, they challenge our beliefs and positions that we hold close to our hearts… and of course many of us have personal experience of violation that is tied to our gender and gender identities, so we are heavily invested, emotionally invested in this topic,” she said.