On 15 May 2017, the Ambassador of France to South Africa, H.E. Mr Christophe Farnaud, hosted a reception in honor of Professor Alan Mabin to award him with the National Order of Merit (Ordre National du Mérite), rank of Knight (Chevalier). 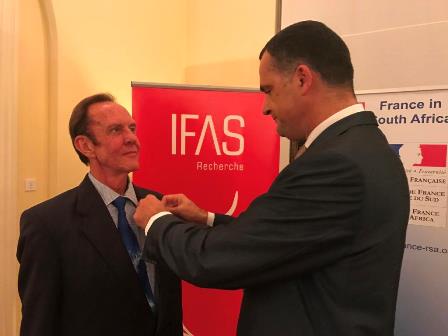 Professor Mabin is an Emeritus Professor of the University of the Witwatersrand. For over thirty years, he has been a key figure in the fields of urbanism, development and town planning. He is the co-founder of Planact, in 1985, a NGO working with township communities and has been involved, as a consultant and board member, in town planning in several municipalities. 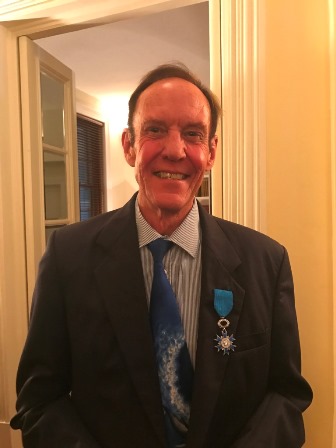 Ambassador Farnaud: “You have been a partner and a friend of IFAS-Recherche since the very first days of the Institute. You spent a lot of time in France, where you practiced your French with Cynthia Kros, your wife, but most of all to do research, to develop joint programs and to teach as a visiting professor, particularly at Paris-Nanterre University and at the Institute of Political Sciences “Sciences-Po”. To say it briefly, Alan, you are a pillar of Franco-South African scientific and academic cooperation. French geographers, in particular, have benefited a lot from your knowledge, your help, and last but not least your enthusiasm”.

Alan Mabin was accompanied by his wife, Ms Cynthia Kros and their two children. 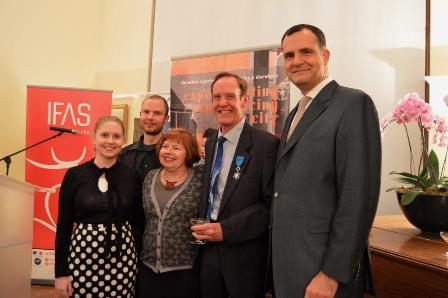 This award took place within the framework of the urban studies cycle entitled Experimenting/Experiencing the city, held at the University of Witwatersrand and elsewhere.

Read the article about this series of events.

About the National Order of Merit:

The National Order of Merit is a French order awarded by the President of the French Republic. It was founded in December 1963 by President Charles de Gaulle. The order was established to create an award for French citizens as well as foreign nationals for distinguished civil or military achievements.