The South African animation industry is emerging in the international market. In this particular field, the Regional Attaché aims to reinforce links with the French animation industry (which currently ranks 3rd in the world), collaborate with the Annecy festival and market (1st animation festival in the world), partner with the Gobelins Animation School, organize visits of producers delegations, share its expertise of the French organization of the image industry system. 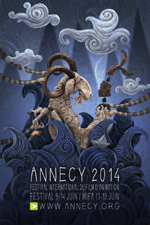 In June 2014, 10 South African professionals were invited by the Embassy of France to visit Imaginove, the animation cluster based in the region of Rhône-Alpes (France), before taking part in the Annecy International Animation Film Festival, world’s largest gathering of animation professionals. Imaginove is one of the oldest and biggest image centre in France. It includes film studios, post-production facilities, a business hotel and a cinema school. This visit was a good opportunity for South African professionals to know more about the French organization of the image industry.

Find out more: "2.36 million : The number of foreign filmgoers attracted to our animated films in 2013"

In 2014, a few French animation films will be screened during the festival, among them "Minuscule", a French-made series of short video animations which took part in the Annecy 2014 competition. The festival will also be the opportunity for French producers and representatives from Imaginove, the animation cluster based in the region of Rhône-Alpes (France), to strengthen their links with the South African image professionals.