CampusFrance, previously named EduFrance, was established in 1998. It is an agency which strives to promote academic exchange through initiating and facilitating cooperation between French tertiary institutions and those based abroad. Dedicated to international academic and scientific mobility, with the aim of increasing the human capital of the countries involved, CampusFrance operates under the oversight and authority of the foreign and European affairs and higher education and research French government departments. The agency has 24 (soon to be 27) branches based across the globe. In addition to the services described above, these centres also present to local students (wanting to operate outside of exchange programmes) who wish to commence or continue their studies in France, assistance with enrolling at a French tertiary institution, applying for visas and bursaries, and other practical advice.

CampusFrance South Africa, in association with the French Embassy and the Alliance Française was officially launched in March 2011.

extra! talks to Elzette Mathys, the newly appointed CampusFrance representative based at the French Embassy and various Alliance françaises, concerning the agency’s projects.

What is the current situation in terms of academic exchanges in the field of science and technology in South Africa? 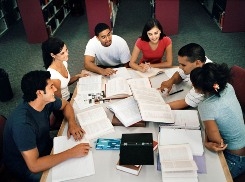 The South African government is increasingly focused on the building of human capital for a knowledge-based economy that would allow it to become more effective in moving towards its goals of economic growth and development. The transformation that South Africa envisions in the years to come can only be made possible by increasing the resources that the country has in terms of knowledge workers – those that hold a tertiary degree as well as those who are committed to continual lifelong learning and would, in effect, allow the country to become globally competitive.

The fostering of scientific-technological collaborations or networks with developed and emerging countries is furthermore required to enhance the country’s competitiveness. In a bid to exponentially increase the growth of its knowledge, the government is aiming at developing international cooperation in order to exploit the opportunities to move forward in advanced technologies areas, in order to create the kind of expertise that will provide the country with much needed socio-economic resolutions.

What can we expect from the newly launched CampusFrance?

CampusFrance in South Africa presents unprecedented opportunities for the advancement of academic exchanges between South African and French higher education institutions. Concretely this means primarily working in close cooperation with universities and their students: liaising with those in the International Offices as well as those involved in research and development, as well as presenting to students more information on the advantages of studying in France. It also means bringing together the resources of other agencies and networks who share the same vision of promoting exchange for development.

To this end, the agency will be present at various forums (one being the NRF forum for doctoral candidates taking place in May 2011), conferences and informative sessions. To give two examples, CampusFrance South Africa recently participated in the NRF post-doctoral forum which was held in Somerset-West in the Western Cape, and was represented in Paris for the meeting with a wide range of French universities and écoles in order to discuss the possibilities for increased student mobility between the two countries.

What do you hope to achieve in South Africa?

In terms of statistics, for the year 2009/2010, 135 South African students studied in France and 132 French students studied in South Africa. These numbers are relatively low when compared with the mobility of South African students toward anglophone countries or French students toward other European institutions. The aim is to create a space in which new contacts can be developed in order to link universities from South Africa and France academically, scientifically and in terms of innovation. CampusFrance affirms that countries (represented by individuals) can increase their own knowledge resources and be enriched through a continuous effort to share their wealth in knowledge with other countries. The agency therefore presents itself as a vehicle in establishing active inter-university partnerships leading to the long- or short-term exchange of students from tertiary establishments, collaboration in research projects, joint degrees and various other educational exchanges that would benefit the participating institutions and even more so, their respective countries as a whole, in terms of socio-economic development.