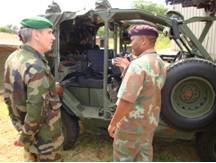 France and South Africa share concerns on security issues and peace on the continent where both countries are important contributors. A global agreement on Defence Cooperation was signed in 1998 paving the way for a global partnership in that particular field. A biannual committee co-chaired by the Secretary for Defence and the French Chief Director of International Affairs addresses the issues of military and defence industry cooperation. An annual Defence Strategic Dialogue, alongside the Political Forum co-chaired by the Secretary General of our respective ministry for Foreign Affairs, is addressing the main issues on global Defence and Security challenges.

Based on mutual agreements endorsed at the Defence committee, our bilateral cooperation is covering the entire spectrum of Defence Cooperation.

Operational cooperation mainly led by our command of the French Forces in La Réunion. France’s cooperation with South Africa is based on two main lines:

Defence industry cooperation France and South Africa are 2 major countries in that particular field and European Defence Industry is implanted in South Africa. Networking and promotion of mutual projects or developments are key points to enhance our relationship.