Pretoria, 30 September 2011 – The arrival of the South African spring marked the departure of a group of talented students who will be continuing their studies at postgraduate level in France. Excited candidates were received at a pre-departure briefing cocktail at the French Embassy in Pretoria by the Cultural Counsellor and Scientific Attaché on the 25th of August, allowing them to meet with fellow students before departing for France. 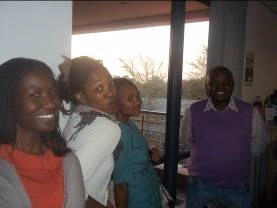 Recipients of the 2011 SAFe Think Bursaries at the French Embassy on the 25th of August.

In an era dominated by globalisation, governments are placing more emphasis on the importance of a knowledge-based economy from which the creation and application of knowledge will inevitably increase socio-economic benefits for all. Aiming at facilitating the international mobility of the student community and ultimately assisting in establishing a network of professional and academic contacts between key figures in the politico-economic sphere, the French Embassy in Pretoria published calls for applications early in 2011, resulting in a total of 19 bursaries being awarded to candidates who passed the rigorous selection process.

The French Embassy Bursary Programme was launched this year, following an announcement by the Ile-de-France region which would no longer be awarding bursaries under the auspices of their “Bourse Master Ile-de-France” programme. The all-inclusive package, covering tuition fees, travel costs and living expenses, is awarded to exceptional candidates who wish to undertake studies at Masters, PhD and post-Doctorate level in any field. Altogether 4 Masters- and 8 PhD candidates will benefit form the programme this year.

2011 Bursary recipients, with agents from the French Embassy, at a pre-departure briefing cocktail

Established in 2010 as a partnership programme between French- and South African think tanks, the SAFe Think Programme awards bursaries to exceptional students who wish to pursue postgraduate studies in the social sciences. Selections are carried out with the assistance of partner institutions in South Africa, notably the South African Institute of International Affairs (SAIIA), the Institute for Global Dialogue (IGD), the African Institute of South Africa (AISA) and the Institute for Security Studies (ISS). The aim of the programme is to ultimately integrate South African think tanks into French, European and francophone African scientific networks. Beneficiaries for the 2011/2012 academic year include 6 Masters candidates and 1 researcher.

Both programmes seek to expose students to international practice, equipping them with valuable knowledge and skills which they may bring back to South Africa to strengthen the country’s human capacity.