The first edition of the “Navy-to-Navy Talks” between the French Navy (Marine nationale) and its South African counterpart was held in Simon’s Town from the 11th to the 14th of March 2013.

Rear Admiral (JG) Charles-Henri du Ché from the French Navy Foreign Relations was leading the French delegation along with Captain Jean-Claude Barrère, the Defence Attaché at the Embassy of France in Pretoria. The South African side was headed by Rear Admiral Hanno Teuteberg, chief director “Maritime Strategy”.

These staff talks were the opportunity to carry prolific discussions between the representatives of the two navies and offered good prospect for further bilateral co-operation in the Indian Ocean. Both French and South African representatives have repeated their commitment and support to regional initiatives for maritime security, especially regarding information sharing and anti piracy operations. Thanks to its naval presence in Réunion Island and to the expertise of its navy, France appears as a key stakeholder in the field of maritime security in the Indian Ocean.

As a symbol for the success of this first edition, the next “navy-to-Navy Talks” will be held in France in 2014. 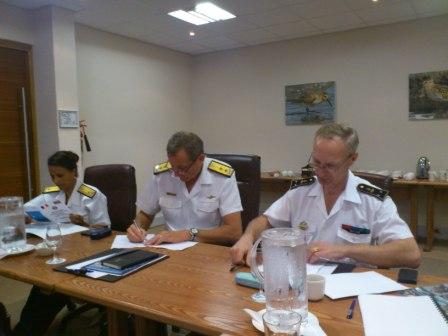 Participants in the Navy-to-Navy talks.