Ms Brigitte Girardin, French Minister for Cooperation and Development, and Mr Jabulani Moleketi, South African deputy minister of Finance, have signed a Framework Charter for Partnership for the years 2006-2010 on 11 September 2006. 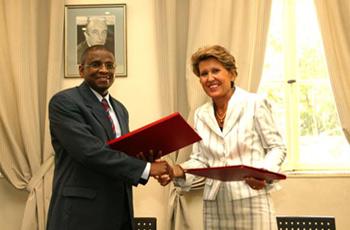 Jabulani Moleketi and Brigitte Girardin at the signing of the Framework Charter for Partnership between South Africa and France.

The Framework Charter Partnership sets out development projects worth 350 millions euros (R3.1 billion) for the next four years in three major fields : service delivery, support for SMEs and job creation, energy efficiency. The partnership agreement was drafted in close partnership will all South African stakeholders and reflects the priorities set out by the South African government.

At the occasion of the signing in Paris, Minister Girardin said : "France invests in South Africa because she believes in this country. We see South Africa as a strategic partner, both willing and able to contribute to African development and the resolution of crises on the continent."

The “Agence Française de Développement” (French Agency for Development - AFD) provides funding for development. Over the last five years, together with its South African partners, both public and private, it has supported over R3.2 billion worth of projects in several fields : affordable housing, basic utilities, support for the productive sector, and capacity building.