Accueil > Newsroom > Archive EN > France bestows the medal of Knight of the National Order of Merit on David (...)

France bestows the medal of Knight of the National Order of Merit on David Kramer, Head of the Sci-bono discovery centre

On the 21st of July 2011 Ambassador Jacques Lapouge was honoured to welcome David Kramer, his family friends and colleagues to the Embassy Residence in Pretoria in order to officially bestow upon him the medal of Knight of the National Order of Merit.

David Kramer has been the head of the Sci-bono discovery centre in Johannesburg since 2004 and his work in encouraging and supporting science education has been both inspirational and important. _ 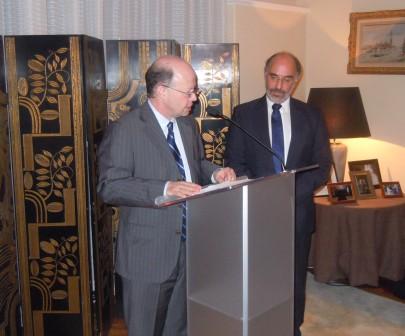 In presenting the award Ambassador Lapouge highlighted the significant contribution made by Mr Kramer towards the promotion of Science education in South Africa. He stated that the reason for bestowing the award upon Mr Kramer was the flourishing cooperation between Sci-bono and a number of French scientific institutions during his tenure. This was attested to by the sheer volume of permanent and temporary installations at Sci-bon from France on topics ranging from electricity to HIV/AIDS and even the science of soccer.

The full text for Ambassador Lapouge’s speech can be downloaded here.

The National Order of Merit was established in 1963, under Charles de Gaulle. It was instated as a unification of a great many national orders across numerous fields, such as trade, tourism and the postal service. The National Order of Merit replaced these many awards with one award, which recognises distinguished individuals regardless of gender, nationality or background.