Welcomed to the Union Buildings by President Jacob Zuma, decorated with French and South African flags flying side by side, François Hollande had a tête-à-tête meeting with his counterpart before co-chairing an extended meeting with South African and French ministers, which gave an opportunity to discuss numerous issues of bilateral interest.

A joint press conference followed, where the two heads of state reaffirmed their shared commitment to strengthen our strategic partnership, reinforce our political and economic ties and cooperate on numerous matters. 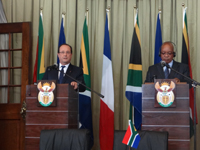 To illustrate this close collaboration, several agreements were signed:Economic agreements

Joint press conference extracts “President Zuma and I share the same the view on international relations as well as on the world’s destiny: a vision of progress.”

Following these exchanges, the two Heads of Stat went to Freedom Park where President Hollande laid a wreath in a celebration of South Africans who died fighting for liberty.

At the end of the first day of his visit, President Hollande attended the State Banquet held in his honour at the Presidential Guesthouse by Jacob Zuma.

To read the full speech given at the State Banquet

On the morning of Tuesday October 15th, François Hollande was paid a courtesy call by Deputy President Kgalema Mothlante.

François Hollande’s visit to South Africa included the two heads of state participating in the Business forum, gathering together South African and French entrepreneurs in Sandton. They bore witness to the signing of a R51b (4M€) contract between Alstom and PRASA, for the supply of 3600 coaches, which represents the most significant contract signed between our two countries in recent years.

To read the full speech given at the Business Forum

On the morning of Tuesday October 15th, President Hollande was received by a praise singer at the Sanofi production plant. The plant, located in Mamelodi in Pretoria, produces ARVs and TB medication for the South African and world markets, providing about a million sufferers with quality products at affordable prices. Following the visit, François Hollande met with organizations fighting against AIDS.

A tribute to South Africa heroes

Willing to renew the partnership implemented in 1994 between Mandela and Mitterrand, is was important for François Hollande to pay a tribute to today’s South Africa and to the battles that led the people of South Africa to liberty. 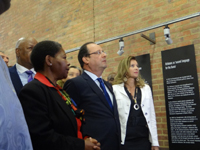 In addition to the visit of Freedom Park with President Zuma, President Hollande went to Soweto with his partner Valérie Trierweiler to visit the Hector Pieterson Museum, named after a school boy killed during riots in Soweto on June 16th of 1976. Dedicated to preserving the memory of these events, the Museum celebrates the role played by students in the struggle for liberty. François Hollande also visited Nelson Mandela House on Vilakazi Street, where the iconic former President lived when he was arrested in 1962.

President Hollande also went to the Mandela Foundation, which aim is to promote humanist ideals defended by Nelson Mandela, in encouraging dialogue about major society issues. There, French President met with Nelson Mandela’s wife, Mrs Graça Machel, in order to convey his best wishes to Nelson Mandela and to pay tribute to his action.

To read the speech given at Mandela House (French only)

Meeting with the French community 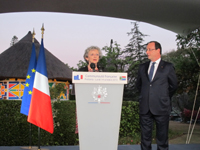 « Living together. Being capable of understanding what those who don’t think like us, those who are different, are experiencing. This is the republican message that, here in South Africa, perhaps finds its greatest echo. »

To read the full speech given towards the French community

Mrs Valérie Trierweiler accompanied François Hollande for this visit to South Africa. Willing to get to know the South African people and their concerns better, she took advantage of these two days to meet with some civil society representatives.

Meeting with the NGO Ekupholeni

On the morning of Monday October 14th, the First Lady went to see the mental health center held by the organization Ekupholeni, which gives support to distressed people from the underpriviledged area of Katorus. It offers support to people suffering from AIDS and victims of sexual violence, as well as a place for dialogue when struggling economic hard times. The center’s employees, of which half is drawn from the local community, was trained by a team of professionals, receive more than 7000 kids and adults a year.

The organization works in partnership with French “Secours Populaire” and the Areva Foundation.

The visit was followed by a lunch with women and LGBT’s rights associations.

Visit of Sky orphanage in Kliptown

Mrs Valérie Trierweiler also paid a visit to the Soweto-Kliptown-Youth (SKY) orphanage, situated at the heart of Soweto area. Created in 1987 to offer an after-school educative program to neighbourhood’s children, the center gives nowadays a daily support to the children but also to the local community.

The visit was a resounding success, reinforcing the close ties shared between France and South Africa and highlighting the depth of our relations, not only in the political realm, but also in business, tourism, cultural exchanges, academic cooperation, scientific research and agricultural development, to name a few.

To see more pictures, visit the gallery on Flickr