As part of a patrol mission in the French Southern and Antarctic Territories, French Surveillance Frigate Le Floréal made a routine port call to Cape Town from 9 to 15 May 2017 from the naval base of Port des Galets in Reunion Island. 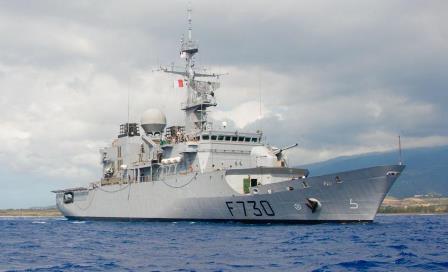 Le Floréal is the first vessel in a series of six surveillance frigates of the same class. She was built by the Chantiers de l’Atlantique in Saint-Nazaire in 1990 and then commissioned in 1992.

With an overall length of 93.5 meters and breadth of 14 meters, Le Floréal displaces 2 800 tons. The crew is composed of 94 sailors: 13 officers, 62 petty officers and 19 seamen. Commander Benoît Deschamps has been commanding officer of the ship since July 2016.

Le Floréal carries out different tasks such as anti-piracy missions, the surveillance of maritime area with ability for recognition and localization of illegal vessels in various weather conditions, the navigation and fishing police in Austral and Antarctic French economic areas as well as public service operations and the enforcement of France’s international defence agreements.