Since 2005 the French Embassy in Pretoria and the greater Paris region have joined forces with the Province of Gauteng in promoting biotechnologies. Following a request by the Gauteng regional government, the Embassy contributed to this prize which recognises major achievements by Gauteng role-players in this field.

South Africa has prioritized Biotechnologies: following the publication in 2001 of its strategy, the country has dedicated €45 million to this field over a three year period.

The Gauteng province, which generates 33% of the national GDP, has since 2005 encouraged the development of biotechnologies. In this respect, it is supported by the Embassy and the greater Paris region: partnership established between Genopole and the Egolibio incubator, establishment of a technological board, promoting a business angels network, etc. In 2009, the Gauteng province set up a biotechnology centre, with its own buildings at the Innovation hub campus, the biggest science and technology park on the continent which involves four large universities (Pretoria, Tshwane University of Technology, Wits and Johannesburg), the CSIR, Egolibio and several companies.

To promote biotechnologies, the Gauteng province hosts a competition to award the best performances in six categories: research, companies, promotion, training, presentation and contribution throughout a career. These prizes were sponsored by the Gauteng province, Monsanto, Egolibio, etc. The Embassy also contributed and gave funds to prize winners in the research and company sectors, consisting of one-week visits to France and partnership programs. 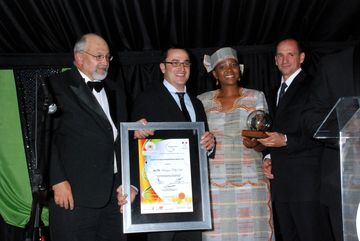 The prize winners were awarded their prizes at an official dinner, on September 2nd, in the presence of the Gauteng Minister of Agriculture, Ms Nandi Mayathula-Khoza, and the Director General of the National Department of Science and Technology, Dr Phil Mjwara. France’s contribution to the development of biotechnologies in South Africa was recognised throughout the evening.