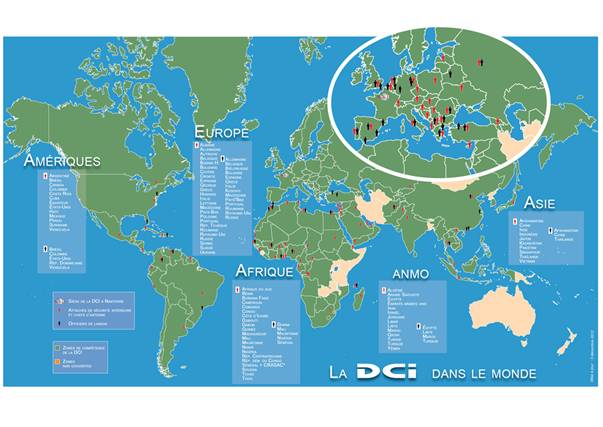 An unsung but very dynamic sector, French expertise is scooping up international invitations to tender in increasing numbers. French public and private agencies generate turnover worth 36 billion euros a year, 11 billion of which goes into exports, and employs over 215,000 people.

“Debout! Couché! C’est bien, le chien” (Stand! Lie down! Good dog!). The German shepherd promptly obeys his master, a Macedonian policeman who is doing his best to pronounce the words correctly, for the dog, trained by experts from France, only responds to commands in French! Promotion of the French language, even among canines, can be an extra side-effect of French expertise abroad but that is not its main aim.

The principle is a simple one: to send the best possible expert on one-off short or long-term assignments to meet a specific need following invitations to tender from a government or an international organisation such as the European Union or the World Bank, which fund projects but do not have the necessary qualified personnel to carry them out.

France: a pool of experts

“France has a pool of experts,” stresses Pierre Bulher, director of France Coopération Internationale, “especially in the higher education sector and research institutes. Our experts from the Ecole nationale de la magistrature (French National School for the Judiciary) or from the Ecole nationale de l’administration pénitentiaire (French National School of Prison Administration), for instance, are highly sought-after abroad”. Unlike other countries, such as Germany, with the GTZ (German Agency for Technical Cooperation) or Luxembourg, with LuxDéveloppement, France does not have a central agency to manage its expertise.

Instead, it brings together private enterprises and public agencies such as France Coopération Internationale. It is increasingly frequent for French agencies to work in a consortium and combine their complementary skills. In the case where no agency is able to find on its database the rare expert sought on a very specialised subject, it is common to call upon European partners to beef up the team. French experts come either from government organisations, which make them available for a specific period, or from the private sector via consultancy firms or independent consultants.

French fields of expertise are many and various. “We have acknowledged expertise in the field of health and health policy,” points out Pierre Bulher, “which dates back to the early days of development aid. Our other strong points are also focused around the organisation of a centralised State: the technical aspect of taxation, customs and duties. Crisis management with civil protection or policing techniques are also flourishing sectors”.

The list of fields of expertise is long: demography, scientific research – especially on cancer, culture and museography, etc. A public agency launched in 2002 by the Ministry of Foreign and European Affairs, France Coopération Internationale, has received no subsidies since 2008 and is none the worse for it: its turnover for 2009 was 33 times greater than the initial subsidy.

A sign of the dynamism and health of a sector whose mission, for FCI, remains at the service of a French policy of influence and solidarity. A vocation that is not incompatible with the law of the market, as the figures show.

Another cutting-edge sector for French experts is education. “We have helped support educational reforms in Syria, Mexico and other countries,” explains Violaine Carbonnelle, of the Centre national d’études pédagogiques (International Centre for Educational Research) which comes under the French Ministry of Education. “We also take part in developing educational programmes and curricula. For instance, in Chile we helped organise management education for SME/SMI”. The Centre National d’Études Pédagogiques is able to meet a wide range of demands, including training teachers in Mali or Togo and providing guidance for the running of schools in Senegal.

In Francophone or Francophile countries, such as certain countries in Africa or the Middle East, providing French experts can be an advantage. “It’s helpful to have French experts who speak English, French and often another language too”. Another quality appreciated by their employers is the capacity of French experts to adapt. “We are often congratulated in the field because our experts don’t arrive with a preconceived way of doing things,” explains Diane de Vaulchier, of CIVIPOL Conseil.

“They take the time to listen and observe before proposing a plan of action to the local partners. This modest attitude pays dividends on the ground.” CIVIPOL Conseil acts on behalf of the French Ministry of the Interior. “Our experts are part of the ministry’s civilian reserve, and are either young retirees,” Diane de Vaulchier points out, “or experts seconded from their administrative department for short-term periods”.

Special intervention forces, canine brigades or the maintenance of law and order are examples of the type of expertise offered by CIVIPOL. This agency runs over 150 projects worldwide each year and has 150 experts permanently in the field.

Language as a tool

Experts are sometimes criticised for working to extend their country’s influence, but this is a very simplistic view. “It’s important not to forget that our experts are first and foremost supporting projects in the countries concerned,” Pierre Bulher reminds us. “It is these countries that are the primary beneficiaries. If as a bonus it improves France’s image or, later on, helps in the establishment of French firms, that is all to the good but it is not the primary aim of our experts”.

As to the influence of the French language, again we are a long way from the caricatures of the monolingual Frenchman. French consultants speak English if that enables them to fulfil their mission more effectively, but not only English. Language is seen primarily as a tool in the service of a very specific development project. Adaptability, competence and pragmatism are the things that make all the difference and ensure the success of French expertise in a very competitive market. The Macedonian canine brigade can only agree, loud and clear.