A high-level delegation from French region Ile-de-France, led by its President Jean-Paul Huchon, visited Gauteng Province from 30 June to 3 July 2007. The delegation met with Gauteng Premier Mbhazima Shilowa to discuss mutually beneficial co-operation in areas that are of interest to both regions, such as economic development, employment creation, urban infrastructure, education and professional training, social service-provision, capacity-building at local government level and health. 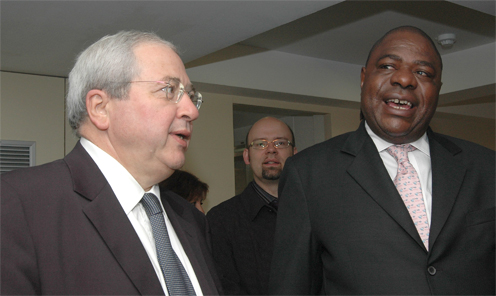 Since an agreement signed between Pres Huchon and Premier Shilowa in 2001, the two regions have worked together in the creation of a website and exhibitions at the Sci-Bono Discovery Centre, in the support of Aids NGO Aids Consortium and a sport programme for young South Africans in Ile-de-France. There has also been co-operation in the field of education through the Ekhuruleni West College in Tembisa. The region has offered its expertise in the organisation of large sporting events to Gauteng, with an eye on the 2010 Soccer World Cup.

The delegation from Ile-de-France had a meeting with French businesspeople in South Africa where the importance of a strategy for the development of commercial ties with South Africa, a major engine of growth on the continent, was emphasised.

Pres Huchon said: "The problems that Gauteng faces occur in Paris too. We can learn from each other’s experience."

The website of the French South African Chamber of Commerce and Industry: www.fsacci.co.za

The website of the SciBono Discovery Centre in Newtown, Johannesburg: www.sci-bono.co.za