French companies participated in the realization of major infrastructure projects

Historically, the construction of the nuclear power station of Koeberg is the 1st important achievement by France in South Africa. Built 50 km north-west of Cape Town, the station was the work of Framatome, associated to Alstom and Spie Batignolles. With two 920 MW reactors put into service in 1984 and 1985, it stays the only nuclear power station in Africa. Areva and EDF work together for the technical maintenance services facilities. 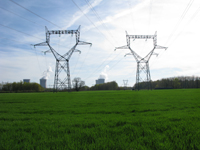 French companies have a significant presence in the field of power production. Alstom delivered 80% of South Africa’s power stations’ turbines and generators, that is to say 34,000MW capacity over a 43,000MW total capacity. Thus, this company participates widely in the equipment of mega power stations being built in Medupi and Kusile (4,800MW each).

French “savoir-faire” can also be seen in the building of the high-speed rail link “Gautrain” between Johannesburg, Pretoria and the international airport OR Tambo. This more than 2 Mds € has been signed on a public-private partnership between Gauteng province government and the company Bombela Concession, consortium in which Bouygues TP (civil engineering) and RATP (line’s management), two French companies, played a central role.

To know more about French companies established in South Africa, please refer to this overview.