Today a growing number of states are considering to civil nuclear power to meet their energy needs, in a context of spiralling fossil fuel prices and the drive to combat climate change.

France’s position is that the peaceful use of nuclear power should not be confined to a handful of states that already hold the technology. At the same time, though, it is essential - both for the countries under consideration and for the international community as a whole - that any country undertaking a civil nuclear programme is not only willing but also capable of meeting essential requirements regarding safety, security, non-proliferation and protection of the environment for future generations. Similarly, the countries in question are confronted with the challenges of finding financing, obtaining access to the technology and the latest research, and training people to satisfactorily conduct their projects. This is why France has expressed its willingness to assist any country wishing to use nuclear technology for peaceful purposes which fully abide by their non proliferation obligations.

The International Conference on Access to Civil Nuclear Energy, to be held in Paris on 8 and 9 March 2010, addresses this goal, namely to promote the peaceful and responsible use of nuclear power. It aims to enable debate on every aspect of developing a nuclear programme and on ways of using bilateral and multilateral cooperation to help countries wishing to embark on such a course to fulfil their international obligations. It will provide for a discussion forum for all of the stakeholders: government policy-makers, executives from the international organisations involved in drawing up and monitoring compliance with the regulatory framework, the managers of industrial companies in the sector and of financial establishments, the heads of research and training bodies, and qualified public figures involved in the debate.

Nuclear power and the energy mix in a sustainable development perspective

The responsible development of nuclear energy : what is an appropriate framework?

How to support new nuclear countries?

How to finance a nuclear programme?

The medium and long-term outlook for nuclear power

This conference is expected to achieve progress, in particular by involving policy-makers in this particular issue and providing an insight into the needs of new nuclear countries. It will contribute to the much-needed dialogue between the states that supply and the states that receive nuclear goods and technologies. Through the guidelines it produces, and through any commitment that may be made for a responsible development of nuclear energy, it will fuel the deliberations conducted in other organisations and other venues.

The Conference is organised in coordination with the IAEA and with the support of the OECD/NEA. It will take place at the OECD Conference Center.

Today there is a growing demand for nuclear energy to meet electricity needs, especially in developing countries. Some solid reasons can explain this renewed interest in civil nuclear energy:

▪ Economic and energy-related reasons. Today rising hydrocarbon prices and the prospect of diminishing resources has prompted a number of countries to look to new sources of energy. Many countries have also been concerned about the security of their energy supply. Nuclear energy is capable of helping us meet this demand, decreasing the use of fossil energies, whose reserves are currently limited, offering energy that for the most part is available, economical and respects the environment.

▪ Environmental reasons. Unlike fossil energies, nuclear energy does not produce any greenhouse gases or air pollution. It is a source of sustainable, clean and safe energy.

We cannot afford to ignore this pressing and legitimate demand. The international community needs to address this demand and limit the proliferation risks related to the fuel cycle in particular.

Nuclear energy can make a vital contribution to satisfying basic human needs and sustainable development in the areas of health, industry, agriculture, access to water and energy, and environmental protection. The international community must therefore strive to share the benefits of civil nuclear energy uses while preventing proliferation risks, especially those related to the fuel cycle.

Nuclear energy does not emit greenhouse gases. At a time when we are striving to tackle global warming, nuclear energy is a solution for fulfilling commitments made by States, including France, to reduce their CO2 emissions. To find out more.

In France, the French Institute for Radioprotection and Nuclear Safety constantly monitors ambient radioactivity levels on national territory in the air, water, ground, food, etc., with which people may have contact. To find out more

Like all human activity, nuclear power generation produces waste. It may be at low levels, but it can be radioactive, which poses a threat to the environment and human beings. That is why radioactive waste from nuclear activities must be managed in a robust and transparent manner which is adapted to this type of waste, as France does. To find out more

France is very committed to the global development of peaceful uses of nuclear energy. It is a source of sustainable energy that does not emit CO2. At a time when there are growing energy needs worldwide, and particularly in developing countries, France is convinced that nuclear energy can make a vital contribution to satisfying basic human needs and to sustainable development.

Nuclear energy: an area in which France has expertise

• France has resolutely chosen nuclear energy for peaceful purposes as an essential component in its energy mix: 78% of electricity generated in France comes from the 58 nuclear reactors in operation.

• All French civil facilities are subject to international controls.

• Unique in the world, French expertise covers the entire fuel cycle: uranium mining and manufacturing fuel, enrichment, construction and use of facilities, reprocessing-recycling, and waste management.

France is fully committed to the implementation of Article IV of the NPT. At a time when there is a growing number of countries with nuclear power capabilities, France stands ready to meet these expectations, in line with its commitments made under Article IV of the NPT, and to share its recognized expertise with any country which diligently complies with all its international obligations, especially those under the NPT, and which pursues in good faith activities with peaceful purposes.

“France is ready to help any country which wants to acquire civil nuclear energy. We can’t have an energy for the future for the Western countries and have Eastern countries which can’t get access to it.” President Sarkozy at the United Nations High-Level Event on Climate Change- 24 September 2007

This does not mean we have to choose between the development of nuclear energy and compliance with non-proliferation obligations. Far from opposing one another, these two pillars of the NPT are designed to mutually reinforce one another so that the largest number of countries can benefit from the potential uses of nuclear energy while ensuring collective security.

We however cannot ignore the specific risks involved in the development of nuclear energy. Such development presents fundamental challenges to our collective security. If we are to ensure everyone’s security, France considers that we must promote civil nuclear energy development that is responsible, in other words, that complies with the most demanding nuclear non-proliferation, safety and security requirements. Together with its European partners, France has drafted robust proposals to that end ahead of the 2010 NPT Review Conference (see the “What France has proposed to do” section).

► Development of bilateral nuclear cooperation: - France is therefore cooperating with a growing number of countries at their request, and is particularly focusing on the needs expressed by developing countries. It has undertaken to engage in long-term partnerships with several of these countries, especially with North African and Middle Eastern countries. France’s nuclear policy is conducted under a rigorous, transparent and multilateral framework (To find out more).

In addition to its contribution to the Technical Cooperation Fund, it makes voluntary contributions to finance a number of actions:

Welcomes trainees in its research institutes and nuclear medicine departments; training programmes, particularly in the area of radiation protection;

Finances major projects, especially in the are of cancer research and fighting malaria;

Active support for IAEA initiatives in the area of building infrastructures needed to introduce nuclear power in countries wishing to have access to it;

Provides French specialists in expert missions for the Agency in many areas.

► Support for multilateral nuclear fuel-supply assurance mechanisms: During its Presidency of the European Union, France, together with its European partners, pledged a monetary contribution of €25 million and European Union technical support in setting up a nuclear fuel bank under the auspices of the IAEA. This project is expected to further develop economically viable nuclear power programmes and prevent the dissemination of sensitive fuel cycle technologies. A nuclear fuel bank goes hand in hand with other initiatives which could be useful in different situations and meet various needs. France seeks to promote pragmatic and concrete solutions which respect the market and needs of beneficiary countries.

It participates in the International Generation IV Forum and IAEA International Project on Innovative Nuclear Reactors and Fuel Cycles (INPRO);

It plays an active role in the Global Nuclear Energy Partnership (GNEP);

The International Thermonuclear Experimental Reactor (ITER) will be built on the European site in Cadarache, France;

It takes part in the Multinational Design Evaluation Programme (MDEP). This programme aims to improve the effectiveness and efficiency of the process to assess the safety of new reactor designs. 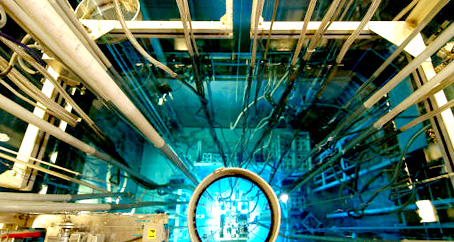