Knight of the National Order of Merit - Sibongile Mkhabela

On 15 June 2021, Ambassador of France to South Africa, H.E. Mr. Aurélien Lechevallier, had the honour to bestow upon Ms Sibongile Mkhabela the title of Knight of the National Order of Merit. 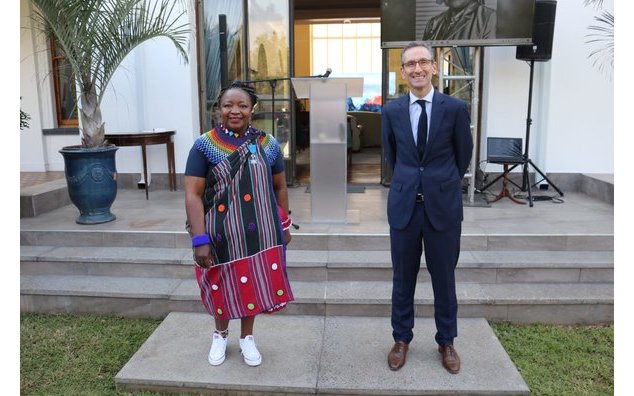 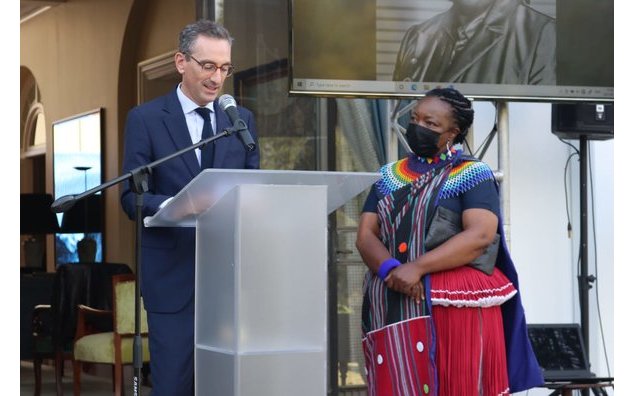 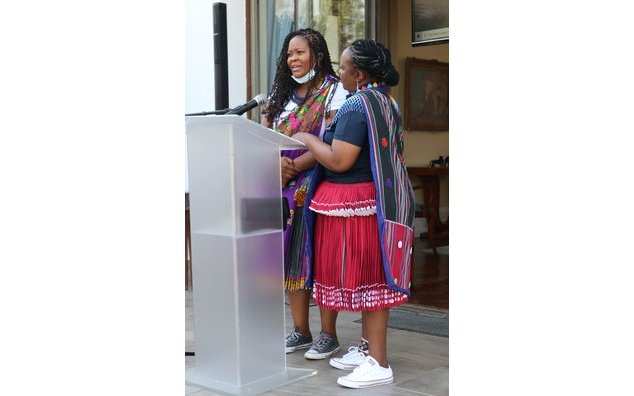 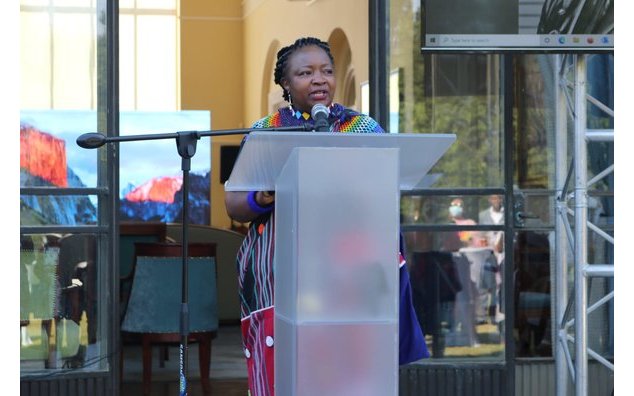 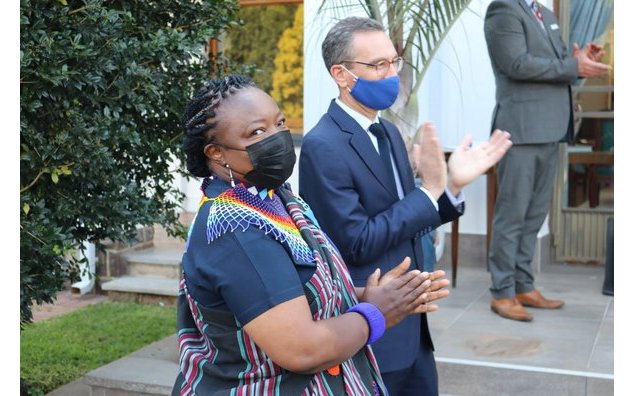 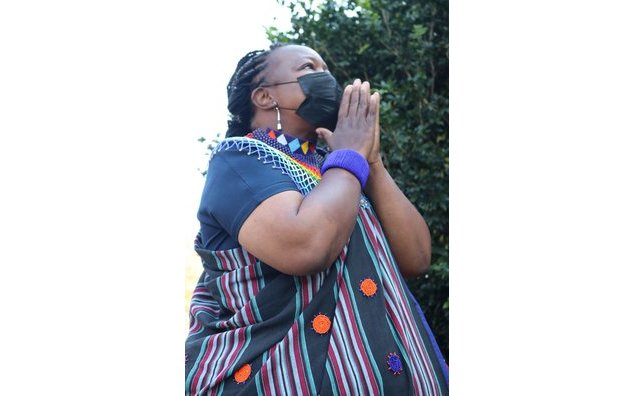 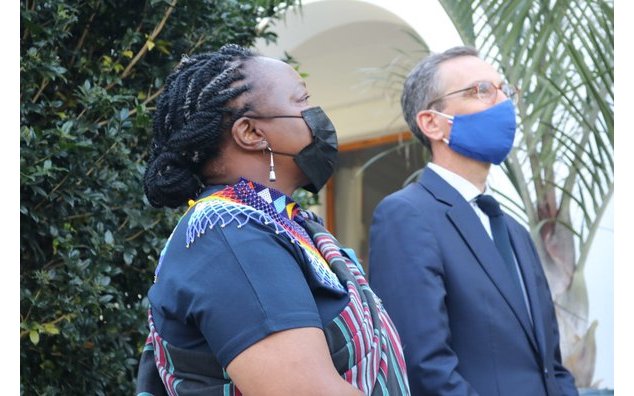 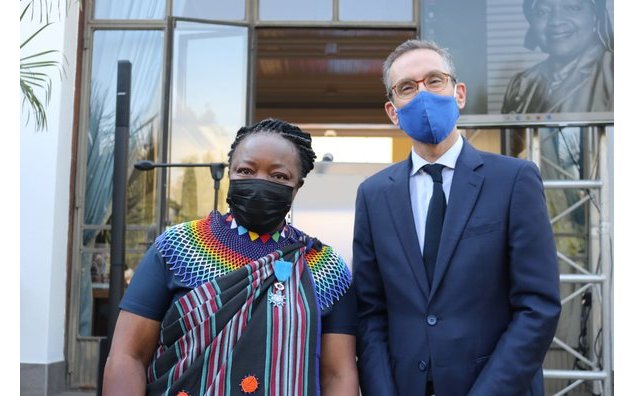 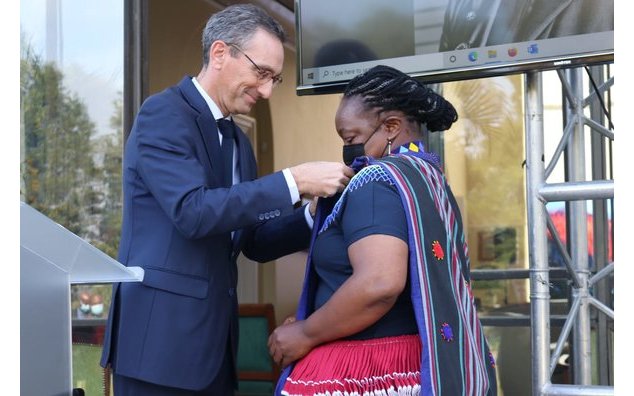 Read the Ambassador’s full speech below:

It is very befitting that we gather here today, on the eve of the 45th anniversary of the Soweto Youth Uprising on 16 June, 1976. We wish to pay tribute to you and your lifelong commitment to the pursuit of freedom and children’s rights. It adds even more significance to this ceremony and to the distinction the Republic of France wishes to bestow upon you today.

Sometimes, an event or an action defines a person’s life. Perhaps, for you, that decisive moment was “June 16”, even though there is no doubt that many other experiences shaped your personal story – including, I trust, many happy ones.

Still, your life journey was certainly greatly influenced by these few days in June 1976, when a student-led movement changed the course of history. It shaped who you would become, along with the political ideas and the dreams you were fighting for as a young activist. It set you on a course to fight for freedom for yourself and others – political freedom, but also freedom, from harm and from fear.

On June 16, your political involvement as a black student in a racially segregated, oppressive and violent system, culminated in this turning point in the fight against the apartheid regime. You said it was “a celebration of having found our spirit” as emerging black leaders.

It took many more years of suffering and sacrifice to achieve political freedom in South Africa, and you had your share of both.

The roots of your activism can be traced back to your student days. Growing up in Zola, one of the poorest areas in Soweto back then, you said you always had a desire for change.

And so, quite naturally for that time, you became politically active while still a student at Naledi High School.

As an executive member of the Soweto Students’ Representative Council and General Secretary of the South African Students’ Movement, you fought against the injustices of the educational system that epitomised the injustices of the apartheid regime. When the regime made Afrikaans, the language of the apartheid regime, the language of instruction in 1974, it was a tipping point. A year and a half later, you were among the student leaders who organised the students’ march through Soweto to protest this decree.

This is all the more remarkable, because at the time, you were the only woman in the core leadership of that movement, and the only woman amongst the young activists who were arrested and sentenced to imprisonment at the “Soweto 11” trial. This earned you the nickname of “rose among the thorns”.

You were just 18 years old, yet already taking on a great responsibility for your community and peers, and ready to make a significant sacrifice.

You were held in custody for more than a year, during which you endured severe treatment for refusing to incriminate your peers. You were then charged with sedition under the Terrorism Act in September 1978, and spent the next four years of your life in detention - including almost two years in solitary confinement.

Being detained at the hand of an oppressive regime didn’t stop you from standing up for dignity and for your rights – sometimes with bravado.

It was a time of great inner suffering, which your daughter Ntseko captured in her play By the Apricot Tree. While surviving these horrendous conditions, you kept true to your beliefs. If you ever lost your hope and resolve, it was only momentarily.

You were released from prison in 1982, but this didn’t mean freedom just yet. Due to a banning order, your freedom of movement, your ability to work, and access to education institutions were restricted.

Undeterred, you completed your matric by correspondence within a year of your release. Later in your life, you pursued an Honours degree in Social Science at the University of Zululand, and a Management Advancement Programme at Wits Business School, all while raising your 3 children Ntsako, Hlawulani and Lindokuhle. You are also a Joel L. Fleishman Civil Society Fellow at the Duke University in North Carolina, USA.

Thus, you’ve lived by your belief that a healthy nation is an educated one. Despite the years spent behind bars – or perhaps precisely because of it – you remained committed to the freedom of black people and women’s rights in Africa. Shortly after your release, you started working with women’s groups such as Black Sash, the veteran human rights organisation advocating for social justice in South Africa. One of the issues you focused on was reproductive rights. Under apartheid, even contraception was racially segregated, and contraceptives for black women often led to infertility issues.

--- A life dedicated to children’s rights and freedom ---

Working for the children’s rights, in South Africa and beyond, has also been a constant common thread throughout your career. You’ve dedicated your life’s work to children’s rights in Africa, and to being a voice for the disenfranchised in society.

You served as Programme Officer for United Nations programmes, and then as Director of Programmes and Projects in the Office of then Deputy President Thabo Mbeki, from 1994. There, your responsibilities included civil society-government partnerships as well as overseeing the implementation of UN agreements on children’s rights.

Your legacy includes the establishment of the National Development Agency (NDA). Fast forward a few years to 2001, and you are the CEO of the Nelson Mandela Children’s Fund established by the former President. Under your leadership over two decades, the organization evolved from a grant-making charity to an institution that continues to play a major role in shaping the way South Africa treats its children and youth.

In this capacity, another landmark accomplishment of yours saw the establishment of the Nelson Mandela Children’s Hospital, thus realizing one of Madiba’s dreams and giving a concrete expression to his legacy. From 2009, you assumed the role of CEO of the Hospital Trust to drive this ambitious project of setting up a tertiary academic referral hospital to improve healthcare to all children of Southern Africa. The hospital opened its doors to it first patients in December 2016.

I’m proud that France was among the first to support the establishment of the Children’s Hospital – and for that again, we have you to thank. You were pivotal in fostering relations between the French government and civil society. Now, you continue to shape the future of South Africa as CEO and Trustee of the Barloworld Empowerment Foundation. This foundation uses ‘storytelling’ to reawaken people’s interest, supporting initiatives at community level and forging debates and discussions through advocacy.

You also serve on the Board of Trust Africa, an independent, African-centred foundation with a focus on democracy, justice, transformative governance, and development in Africa. They have shared a message for you which we’ll listen to in a short while.

Dear Sibongile, you’ve been very busy these past 45 years! Many words have been used to describe you (in no particular order): “organiser”, “rock solid”, “open person”, “humanist feminist”, “incredibly courageous”. These are reflections of your relentless commitment to fighting for, and working to give a voice to the powerless in society. They also represent your intertwined life experiences as an activist, a spouse and mother, a social worker, and a leader.

You’ve led by example, and you’ve been steadfast in living by your principles. I’ll name just a few:

1994 was the beginning of democracy, and of another journey towards freedom. There is still a lot that needs to be done to fully meet the promises of freedom and equality for all.

You’ve said that this journey needs leaders on the ground - like teachers, nurses, professors, the people who walk down the streets… This resonates with the importance of acknowledging and honoring the “every day heroes” of History; those who may have stood out of the limelight but contributed to the greater good, sometimes at great personal cost. The world does not change at the hand of “big” people and strong men. And sadly, history doesn’t always do justice to women.

Hence bestowing the Knighthood on you today is part of reminding ourselves that history is written by many, often young people – and often women. With your book Open Earth and Black Roses, you’ve contributed to shine another light on South Africa’s complex history. You documented the challenges of the girl-child in the 1970s and 1980s in black townships. And you told the story of the youth who struggled for justice and freedom, and of their sacrifices.

Dear Sibongile, your journey is inspiring, and a beacon for many young people, especially young women. You are a giant on whose shoulders they stand. Your dedication to serving others and standing for justice and freedom speak to the values of the French Republic: freedom, equality and solidarity. Thank you for being one of those who bring these values to life.

On behalf of the Government of the Republic of France, I have the honor and pleasure, Sibongile Mkhabela, to bestow upon you the title of Knight of the National Order of Merit.