The Alliance Française de Maseru is one of the main organizers of the first Lesotho Sports Film Festival which will take place for 6-8 April 2017 in Maseru. The Alliance Française de Maseru is part of this Film Festival within the framework of the #Paris2024 campaign to show its support to Paris’ candidacy for the 2024 Olympic and Paralympic Games. 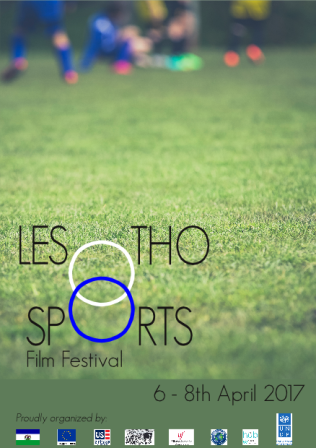 The Sports Film Festival is being organised by the Lesotho Ministry of Gender, Youth, Sports and Recreation; the Ministry of Tourism, Environment and Culture ; the Alliance Française de Maseru; the United Nations Development Programme in Lesotho, the American Embassy; the European Union Delegation in Lesotho, Sesotho Media and Kick 4 Life.

During three days, you will have the opportunity to watch different short movies and films from different countries about sports and you will also be able to practice sports on Saturday. Join us!

The Lesotho Sports Film Festival will be opened on Thursday on the occasion of the International Day of Sport for Development and Peace. After speeches from the American Embassy in Lesotho, the European Union Delegation in Lesotho, the United Nations Development Programme and the Ministry of Sports of Lesotho, two short movies will be screened. The first one will be:

“A fighting chance”, by Morgane Neville (2016): a documentary about Tsepo Ramonene from Lesotho. A Fighting Chance tells the inspiring stories of athletes around the world defying barriers to pursue their dreams of competing at the Olympic Games in Rio 2016. The film visits Lesotho, Vanuatu and the Dominican Republic to capture the ambition and the shared passion of these Olympic hopefuls. Marathon runner Tsepo Mathibelle supports his entire family in Lesotho and dreams of winning Lesotho’s first Olympic medal.

Two films will be screened:

“Ali”, by Michael Mann (2002): A biography of sports legend Muhammad Ali, focusing on his triumphs and controversies between 1964 and 1974. Alliance Française de Maseru, 7pm

“Ladies’ turn”: by Alexis Taillant and Jeanne Thibord (2013): Using the Ladies’ Turn tournament as a starting point and following the people who invest their talent and their convictions in its success, the film seeks to expose both a Senegalese and international public to the determination of the players despite the difficulties and prejudices that they face.

All day long you will have the occasion to practice sports. A movie will also be screened on that day:

“Inside story” (2011), South Africa: Meet Kalu, a gifted football star whose journey to soccer stardom is complicated when he learns that he is HIV-positive. What follows is an entertaining and educational ride that follows Kalu and the virus within his young body.

Members of the National Paralympic Committee from Lesotho will attend the event.