The Managing Board of the French South African Institute of Technology (F’SATI) was held in Paris on the 4th of July.

This annual event gathered the different stakeholders of this training and research center. On the South African side, it gathered the Cape Peninsula University of Technology (CPUT), the Tshwane University of Technology (TUT) , the National Research Foundation and the Department of Science Technology. On the French side, the participants were the Embassy of France in South Africa’s Attaché for Science and Technology, the Paris Île-de-France Regional Chamber of Commerce and Industry, the University Paris-Est Créteil (UPEC), and the engineering school ESIEE. 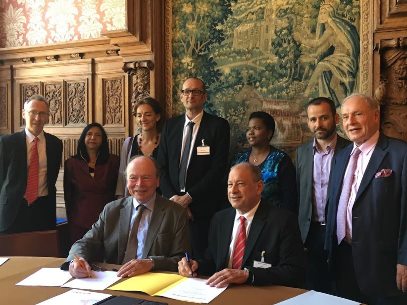 Created in 1996, the F’SATI (French South African Institute of Technology) is a French South African graduate institute for teaching, research and development that contributes to the creation of knowledge and transfer of technology in South Africa in the field of telecommunications, energy and power systems (at TUT ) and in space sciences, satellite engineering and embedded electronics (at CPUT). This year, the F’SATI has 213 students, and has delivered 19 Masters and 7 PhDs last year.

The managing board was an opportunity for all the partners of this cooperation project to speak about the recent audit of F’SATI that was conducted by the NRF with a positive outcome. The extension of the program was also discussed, Nelson Mandela Metropolitan University (NMMU), Durban University of Technology (DUT) and Central University of Technology are being considered to host the new centres. French universities will also be associated with the project, as well as the French company Airbus, through experts’s visits and internships.

F’SATI is at the crossroads of its developement, and new French partners must be found to contribute to this flagship project of the cooperation between South Africa and France.