The Directorate of International Cooperation -DCI

An international response to the multiple challenges of a changing world

To better address the various threats that originate beyond our borders such as terrorism, transnational organized crime, drug trafficking or weapons, cyber crime..., cooperation among countries must intensify. For France, the Ministry of Interior network (A.S.I.), which is made up of 250 police and gendarmes deployed to 92 Embassies and covering 156 countries, provides an effective means of bilateral or multilateral cooperation.

A mission of coordination and animation

DCI participates in the implementation of the international strategy of the Ministry of Interior and the implementation of the foreign policy of France for internal security. It animates and coordinates operational, technical and institutional cooperation, the police and the national gendarmerie, with the exception of the issues governed exclusively by the intelligence services. To carry out its tasks, the Inn relies on a central level and decentralized services located abroad, the internal security services (S.S.I.), the police and gendarmes stationed in the countries considered.

A quest for coherence and efficiency

The creation of the DCI allows reduce costs and improve performance by bringing together in a single structure, the key players in international police cooperation. 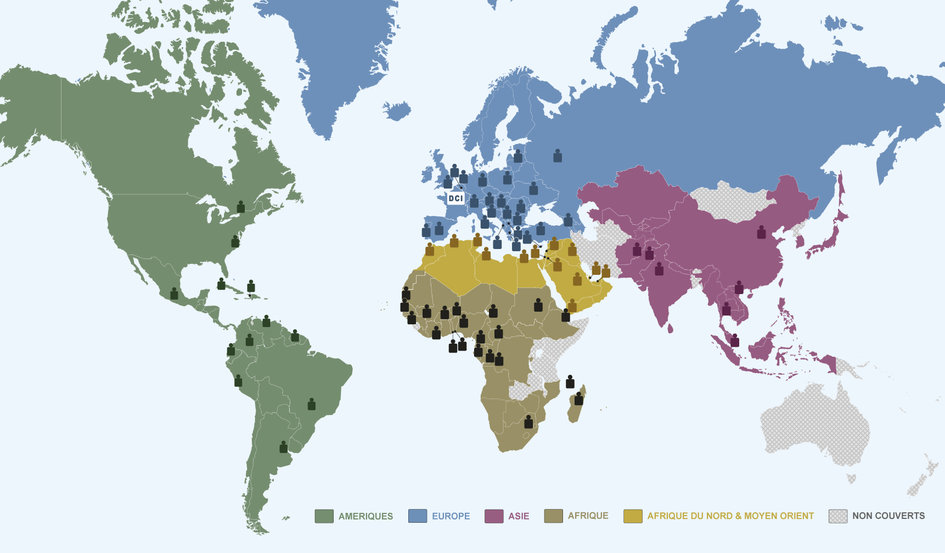 The safety and security officer (A.S.I.)

Advisor to the Ambassador for all matters relating to internal security, he animates and coordinates bilateral cooperation of security and multilateral cooperation, in particular in their technical, operational and institutional aspects. The internal security Attaché has diplomatic status and implementing the cooperation defined by the Minister of the Interior in accordance with the General guidelines of our foreign policy. Privileged interlocutor of local police or gendarmerie authorities, ASI is, the representative of the police and the national gendarmerie abroad. He proposes implementing cooperation programs, participates in the mission of assistance to the resident French community and contributes to the internal security of France through its action.

Mission of the interior security (S.S.I)

For the performance of its duties, it may be assisted by a Deputy Security attaché and liaison officers, international technical experts, cooperating police or the national gendarmerie, which he leads and coordinates all the activities. Its missions lead the service to develop the exchange of operational information with the police of the country of residence, particularly as regards international crime (illegal immigration, organized crime, terrorism, drug trafficking, weapons and humans...). It is an essential link in the implementation of European arrest warrants. It participates in the accompaniment of international rogatory letters. It also provides assistance to the promotion of French industry in the field of safety equipment and takes part in the assisting the French resident Community. By its daily activities or in the preparation of bilateral or multilateral cooperation agreements, the SSI contributes directly to the internal security of the France.

Located within the Embassy of France in Pretoria (South Africa) since 2003. Its creation dates back to 1993.