Home > THE GIANT MATCH, An enthralling creative adventure made in South (...)

THE GIANT MATCH, An enthralling creative adventure made in South Africa 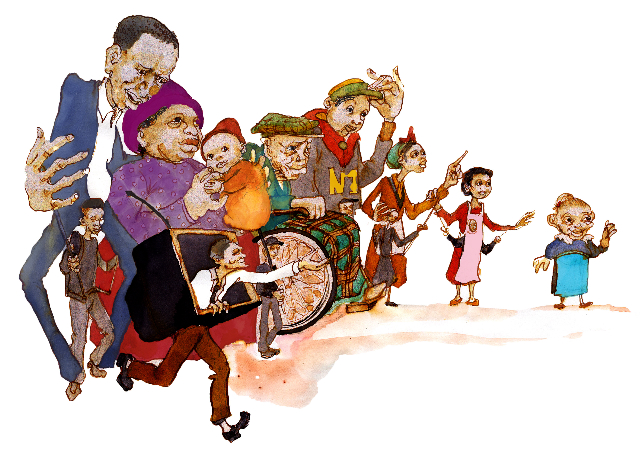 With the 2010 FIFA World Cup around the corner, a street theatre performance staging 32 giant puppets, each measuring up to four meters high, masks and objects, will be performed in public spaces and communities in Gauteng and beyond.

This exciting project, which will spice up the atmosphere of the World Cup, will entertain the crowds and benefit South African artists and craftsmen in a great way. The aim is to create a large show accessible to all and tailor-made on the scale of South African townships and neighbourhoods, thus reaching a wide audience.

The drama is a South African allegory of Romeo and Juliet, which tells the story of two young lovers kept apart by the feud between their two families, culminating in an epic and comic football match, before the two parties are reconciled and the couple happily wed.

The two families will be multiethnic, each including various members of the Rainbow Nation and gathering four generations, from the great-grandparents to the great-grandchildren. All of them, men and women, old and young, will play football with the same energy and enthusiasm. The protagonists of the show will be as varied as their creators!

17 artists from France, Italy, Chile and Burkina Faso and up to 100 South African artists and professionals directly involved.

Shows running in townships and other public spaces;

Parades in public spaces (stadiums, streets, public viewing areas, fan parks and communities) in Gauteng (including the Pale Ya Rona Carnival) and South Africa around the FIFA Soccer World Cup.

• The Project in brief:

This international dynamic platform will:

gather artists from different communities and countries to collaborate on a creative project;

ensure skills transfer and opportunities of revenues after the soccer world cup as a legacy to South African artists from disadvantaged communities;

For media enquiries, please contact Eléonore Godfroy-Briggs at the French Institute of South Africa on 011 298 2706 or comm.culture@ifas.org.za

About Gauteng Department of sport, arts, culture and recreation

·To attract champions from the sports, arts and culture sectors to stage major events and tournaments in Gauteng;

·To develop young sporting and artistic talent to take its rightful place in competitive sport and mainstream arts and culture events;

·To promote nation-building and deepen democracy through celebrations of national days and the development of heritage sites;

·To support the development of safe and secure communities through the implementation of integrated and sustainable mass participation and recreation programmes at community level;

·To promote sustainable livelihoods for artists, crafters and sport people.

·To promote access, equity and transformation in the sport, arts and culture sectors;

·Modeling a high degree of financial accountability throughout the organization ;

·Being a caring and effective organ of state by adhering to Batho Pele principles ;

About the French Institute of South Africa (IFAS)

Food-for-thought provider “à la française”, the French Institute of South Africa (IFAS) was established in the Newtown Cultural Precinct in 1995. Since then, the organization which consists of IFAS-Culture, IFAS-Research and Dibuka, has been a key player on the Johannesburg and Southern African artistic, cultural, academic and literary scenes.

IFAS-Culture is the cultural agency of the French Embassy in South Africa and supports artistic events in various domains, throughout the year and around the country. Highly demanding in offering quality creations while favouring the exchange of ideas between communities, IFASCulture strives to introduce French and Francophone artists in South Africa, promote South African artists on the international artistic scene and support artistic residencies leading to original creations.

As a promoter and diffuser of French language and Francophone culture, IFAS-Culture works in close collaboration with the Alliance Française network in South Africa. Since its inception, the organisation has established an important network of strong partnerships with various festivals, universities, artists, museums and galleries, as well as government institutions and businesses.

The audiovisual department includes cinema, television, radio and journalism. It aims at initiating and developing exchanges and relationships between the different media and the professionals of the audiovisual industry in France and Southern Africa.

Les Grandes Personnes is a collective that was formed in 1998 in Aubervilliers (France) and, later, in Boromo (Burkina Faso). Its mission was developed around a popular and intrusive practice of visual arts and around the desire to create sculptures that can perform and exist in the streets.

The team worked for several years on ambulatory and participatory art forms, creating sculptures and giant puppets in particular that, once inside a city, give it a new perspective. When these puppets move around, onlookers watch through children’s eyes, offering urban dwellers new perspectives on their lifestyle.

Collective “Les Grandes Personnes” has been taking part for twelve years in many festivals and parades in France and abroad. It founded several other associations, with one of them, in Burkina Faso, traveling and performing with several families of ‘giants’ from Boromo in Burkina Faso to Valparaiso in Chile.

In 2008, they performed a residency in Orange Farm which led to the creation of South African collective SA G.U.R.U. which has been performing since then in parades throughout South Africa and abroad.