A shock wave runs round the world as soon as a disaster strikes somewhere, as happened in Haiti last January. Such a tragedy gives rise to emotion, concern, distress and quite often a sense of powerlessness. But for the 56 members of the Crisis Centre (Centre de Crise - CDC) of the French Ministry of Foreign and European Affairs, careful thought and action take precedence over emotion in order to bring help as quickly and effectively as possible. 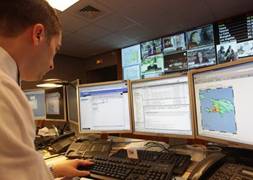 Around 11 pm, Paris time, on 12 January, the news has just come in. A magnitude 7 earthquake has just struck the fragile island of Haiti in the Caribbean. The 24-hour Watch team of the Crisis Centre is on alert, as it is 24 hours a day seven days a week, monitoring disasters worldwide. J

ust a few minutes after the tremors have ended, Serge Mostura, director of the Crisis Centre, is on the telephone with His Excellency Mr Didier Le Bret, France’s Ambassador to Haiti. It is vital to organise and assess as quickly as possible the help necessary for French nationals in Haiti but also for anyone affected, regardless of nationality.

In the Ministry’s buildings, a stone’s throw from the Seine, everyone is mobilised. Within a few hours, a French military aircraft will land on the tarmac of Port-au-Prince airport, the first in a long series. “When the earth shakes, it shakes for us all,” says Serge Mostura dispassionately today, and that sums up the mission of the Crisis Centre: to combine the consular missions (on behalf of French nationals) of the French Ministry of Foreign and European Affairs with humanitarian ones.

Aiming to be ever more professional

The idea of merging two of the Ministry’s departments into one, the first responsible for the safety of French nationals abroad, the other responsible for humanitarian action, first took shape in 2007. Two departments responding to the same demand: the urgent need to respond as professionally and appropriately as possible to a crisis, whether it be natural, medical or technological. The 56 people mobilised (career diplomats or those on short-term contracts) must show great versatility and resourcefulness, as well as a great deal of composure under stress.

The primary role of the Crisis Centre, launched in July 2008, is to coordinate the people on the ground: soldiers, civil defence, NGOs and local diplomatic staff. Everyone has a very precise role to play, and the CDC oils the wheels of this emergency aid machine. The role of some is to analyse, plan and arrange the help. Specialists on the region concerned from other departments of the Ministry of Foreign and European Affairs contribute their expertise and experience, always with relevance and focus.

“Managing crises abroad,” explains Serge Mostura, “is like managing a confused and brutal battle. We cannot see what is happening and yet we have to act.” Other members of the CDC jump into the first plane that can get them to the destination, in order to coordinate matters locally and support the consular staff, who may themselves be directly affected by the crisis. For instance in Haiti, the gardens of the totally destroyed Ambassador’s Residence were transformed into a refugee camp and field hospital. The CDC diplomats, like those of the Embassy, sleep on the ground like everyone else, suffering water and food rationing, but they carry out their mission.

Keeping the information flowing before and after

To anticipate these responses, the CDC plans and prepares with its foreign missions smooth-running safety plans to enable French nationals to be evacuated should the need arise. Cooperation with French businesses who send people to work abroad is also essential.

In Paris, a call centre manages the anxious enquiries of friends and families and tries to provide news and answers as quickly as possible. A freephone number is then set up. When the earthquake happened in Haiti, over 190 government officials took turns 24 hours a day for three weeks to field the 18,500 calls that came in.

All work on a voluntary basis and carry out the task on top of their normal ministerial activities. Everyone is expected to have the capacity to adapt but, Serge Mostura confides, “you do have to like people too”. Empathy is in fact a prerequisite when you find yourself in the small hours calming and listening to a member of a victim’s family, who may have become incoherent and aggressive through too much grief and stress.

Strong nerves are therefore called for on the part of the staff of the CDC which also deals with the hostage taking of French people abroad. There were 50 such cases in 2008, 30 in 2009. There again, the CDC supports families immersed in doubt and fear. “We have to be intuitive, perceptive,” points out Serge Mostura, “and establish a relationship of trust”.

Support once the emergency is over

To avoid risks and provide information on the actual situation in a country, the CDC publishes “advice to travellers” for each country which can be consulted on the internet www.diplomatie.gouv.fr and on an iPhone app and Android phone before planning a trip. This information is prepared by local French diplomatic missions and by experts on the countries concerned.

Afterwards, the CDC provides support for the establishment of cooperation and humanitarian aid after emergency situations and thereby backs up the work of French NGOs and local authorities which can set up partnerships. This is a natural follow-up to the aid provided by the CDC and the French ministries concerned (Foreign and European Affairs, Defence, Health, etc.) after the crisis, when so many things still have to be sorted out.

The original and recent experience of the CDC has aroused curiosity and interest. Foreign delegations regularly visit it as a source of inspiration. “Our strength,” observes Serge Mostura, “comes from our speedy response but also from our capacity to learn from our experience. In order to be ever more effective”.