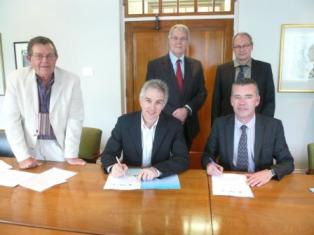 The UCT and the UBO have signed an agreement to co-badge Masters and PhD degrees in the ICEMASA framework on 9th November 2011 A delegation of the Universite de Bretagne Occidentale (UBO) located in Brest, France, has visited the University of Cape Town (UCT) from 7 to 10th November 2011, to finalize and sign agreements which will allow exchange of students at Masters and PhD levels of both Universities and the awarding of co-badged degrees. The UBO was represented by its President, Pascal Olivard, its deputy President in charge of Research, Pascal Gente and by the Director of the Institut Universitaire Européen de la Mer, Yves-Marie Paulet. This visit is a follow up to the visit made in Brest, in May 2011, by representatives of UCT (D. Visser, DVC ; Marilet Sienaert, Director of Research ; and John Field , Marine Research Institute, (Ma-Re) Director). Two major documents were signed on 9th November 2011 : a Memorandum of Agreement (MoA) to promote institutional exchanges of staff on research, education and professional development programmes, and a Specific Implementation Agreement (SIA) directly related to ICEMASA, detailing the institutional, technical and financial aspects of the student exchange programme and the co-badging of degrees. The MoA is a broad agreement which is designed to accommodate several SIAs if necessary. Although the MoA is signed between the two universities, the SIA also comprises a third partner, the IRD (Institut de Recherche pour le Developpement) which is also actively involved in the education and training programme. (read...)